Most people do not know that there are two main states of periodontitis: active and stable. Whether an individual suffers from active as opposed to stable periodontal disease depends on a variety of characteristics. Furthermore, risk and treatments plans differ depending on whether the gum disease is active or stable. This article focuses on active periodontal disease.

Active Periodontal Disease: Characteristics
The most straightforward way to tell if someone has active periodontal disease is to measure the attachment level of the gum to the tooth. This is accomplished by gently probing the gums and calculating the position of the soft tissue in relation to the cemento enamel junction (CEJ). The CEJ is the place where the tooth enamel and the cementum covering the tooth root meet. The greater the probing depth, the poorer the attachment level, demonstrating that the disease has progressed.

I also use probing depths to analyze the extent to which the disease has taken over. Using a probe, I measure the pocket depths between the tooth and the gums. Ideally, a patient with healthy gums will have pockets of no more than three millimeters and little to no bleeding upon probing. 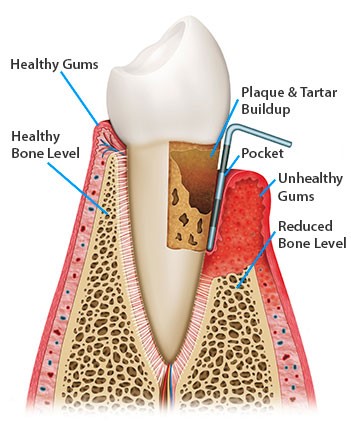 Gum disease strikes stealthily, starting out as gingivitis, which is a comparatively mild inflammation of the gums that causes bleeding, swelling, and bad taste. However, left unremedied, the gingival plaque affecting the surface of the tooth will begin to grow underneath the gum line. This “subgingival” growth inflames and irritates the gums.

As the subgingival plaque multiplies, it will start eating away at the periodontium, which is the tissue surrounding and supporting the teeth. The plaque contains toxins that trigger a chronic inflammatory response, worsening the deterioration of the periodontium. The bacterial destruction of the teeth’s supporting structures will ultimately cause the teeth to fall out.

Not only does untreated periodontal disease result in tooth loss, but it also takes a toll on individuals’ systemic (whole body) health. To put it briefly, the toxins entering through the diseased gums can perpetuate a host of problems, including endocarditis, diabetes, and cardiovascular disease. You can read more about the effects of unchecked gum disease here.

Although the consequences of unchecked periodontal disease sound dire, if caught early enough, treatment and stabilization of the disease is usually possible.

Active periodontal Disease: Treatment
First, a consistent oral care routine at home is crucial. Along with brushing and flossing after every time eating, individuals can also in increase their periodontal well-being by being intentional about the food and drink they consume. For example, eating crunchy, fresh, fibrous foods helps scrape away bacteria at the gum line and generate more saliva, which in turn aids in flushing out bacteria. Read more about at home care here, and beneficial foods to eat here.

Second, it is imperative to keep regular periodontal maintenance appointments (PMAs). Even after complete elimination, bacteria repopulates below the gum line after only six to eight weeks if not removed by a thorough cleaning.

At your PMA, your oral health care professional will measure your probing depths and analyze your overall oral health status to ensure that the disease is not progressing. She will also thoroughly clean your teeth, gums, and tooth root to eradicate hidden bacteria. Finally, she will work with the periodontist to advise you on any additional steps or treatment plans best suited to restore your periodontal health. Read more about PMAs here.

To conclude, periodontal disease is not something that can just be ignored in hopes that it will magically heal itself. Unchecked, periodontal disease causes a plethora of health problems not only for the teeth, gums, and jaw, but for the entire body. Fortunately, it is not difficult to find out if you have it, and treatment options are readily available and highly successful.