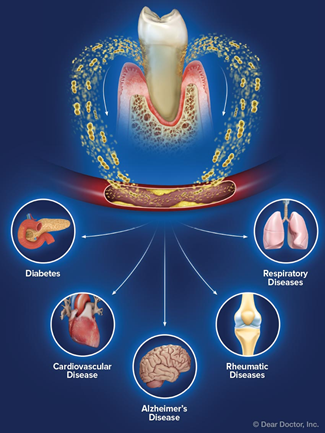 Although scientists have yet to fully understand the link between periodontal disease and rheumatoid arthritis, the connection between the two is more than mere coincidence. In a study published in the Journal of Periodontology, researchers found that individuals with rheumatoid arthritis were about eight times more likely to have periodontitis. 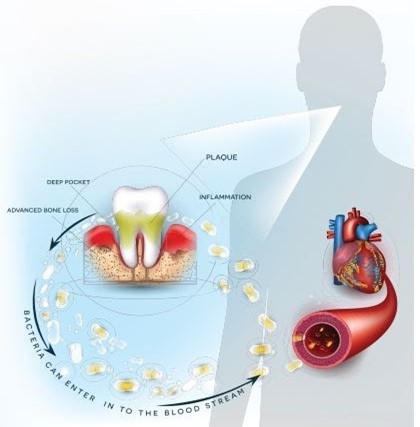 When bacteria is permitted to remain in the gums, the bacteria can travel down to the lungs and cause harm. While healthy lungs have better protective defense mechanisms, diseased lungs are not as capable of warding off bacteria that has traveled from the gums. Also, infected gums trigger a systemic immune-response which causes inflammation not only in the gums, but also in the lungs.

Heart Disease and Periodontal Disease
Gum disease begins when dental plaque accumulates around the teeth. A different type of plaque called atherosclerosis, the hallmark of heart disease, can build up around the arties. Interestingly, people with periodontal disease are two to three times more likely to suffer a cardiovascular event. Gum disease may be an independent risk factor for cardiovascular disease.

Why are people with periodontal disease more likely to suffer a heart attack or stroke? Periodontal disease increases inflammation in the entire body. In particular, the bacteria present in gum disease can travel throughout the body, produce inflammation in the heart vessels, and infect the heart valves. In fact, people with heart valve disease are particularly at risk when gum disease is present. This is because the oral bacteria associated with gum disease crosses into the bloodstream and can enter the heart and attack vulnerable heart valves.

Reduce the risk factors
Fortunately, gum disease is treatable. Just like people should not neglect their doctor check-ups, they should not shirk their dental or periodontal appointments either, particular since gum health correlates so strongly with whole body health. Unless you stay apprised of your periodontal health, you may not know there is a problem until serious periodontal and medical treatment is required.