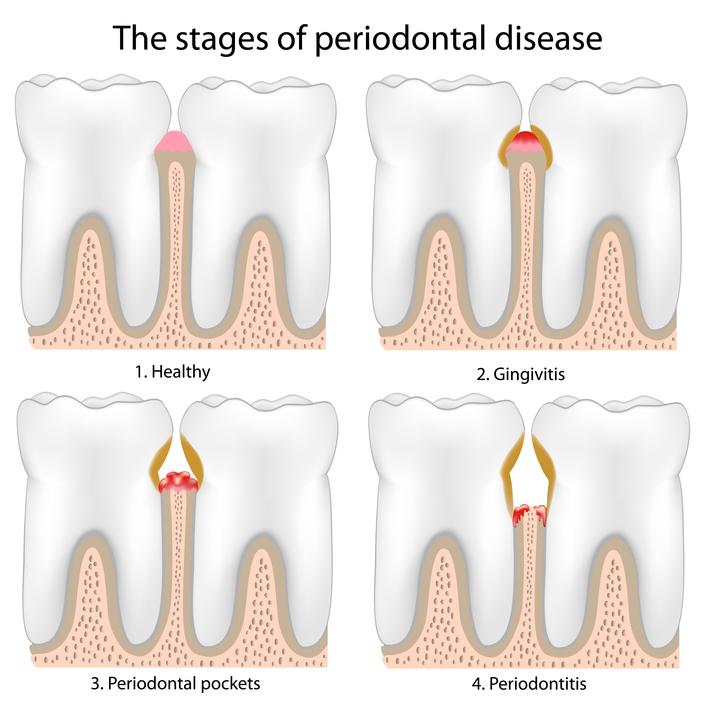 A dental cleaning is designed to remove unsightly stains and bacteria from the tooth’s surface above the gum line. This area is known as the crown of the tooth. However, a periodontal maintenance appointment (PMA) goes further; it is designed to clean the plaque and calculus from above and below the gum line as well. PMAs rid the teeth and gums of the subgingival plaque (the bacteria below the gum surface) that constantly proliferates and causes decay, gum disease, and bone loss. While dental cleanings remove visible bacteria from the teeth, PMAs battle the relentless bacteria that lurk below the gum surface in the area known as the tooth root.

Another factor that sets PMAs apart is the necessity of regularly attending one’s PMA. While dentists typically recommend a dental cleaning every 6 months, periodontists often advise their patients to make their periodontal maintenance appointments every three or four months at minimum. Bacteria proliferate rapidly in the teeth’s surrounding tissue unless the gums are properly and consistently taken care of. Because bacteria and debris constantly breed under the gum line at this rapid rate, usually pockets are repopulated after six to eight weeks in areas deeper than three millimeters (pockets). Therefore, susceptible patients need PMAs more frequently than six months; three to four months would be more appropriate.

During a PMA, the periodontist or hygienist cleans not only the bacteria on the tooth surface (a.k.a the crown), but also the bacteria up to 3 mm below the gum line. As previously mentioned, the bacteria in this area re-multiplies with astonishing rapidity even after initial removal, and regular care must be paid both to the tooth crown and to the root to maintain a healthy mouth. For this reason, regular, semi-annual PMAs are crucial.

Hygienist Sydney summarizes the difference between a dental cleaning and a PMA, detailing, “A PMA reaches deeper and is more tedious because you go below the gum line. We treat the apex of the pockets. Because  most periodontal patients have more tooth exposed due to recession, there is more tooth to clean. We have to use great attention to detail.”

Dr. Singletary also offers insight on the difference between dental check-ups and PMAs. He explains:

Dental cleanings are usually done on people who haven’t had significant periodontal problems in the past. Their probing depths are usually 0-4 millimeters, and they usually do not have a lot of plaque buildup or decay under the gum line. These dental patients do not require as much documentation on probing depths, bleeding indices, or plaque analyses.

A PMA is a very detailed cleaning. 6 probing depths are taken per tooth. We take a plaque analysis to help gauge the patient’s oral hygiene, a bleeding index to indicate if there is infection, and probing depths to measure bone loss. We also perform a general head and neck exam, and an oral cancer screening. A key difference is the probing, bleeding, and plaque analysis in the PMA. Probing depths greater than 3 millimeters indicate the beginnings of periodontal problems. Anything greater than 5 millimeters is significant and indicates bone loss. In these cases, further treatment, such as root planing and scaling, should be discussed.

Lastly, Dr. Singletary discussed the recall sequence, or the amount of time, that should pass between each scheduled PMA. He explained:

The recall sequence is crucial for a PMA because it takes a mere 6-8 weeks for bacteria that has been removed to grow back into gum pockets. For people more susceptible to gum disease, this means that they need to be vigilant in their periodontal care, ideally scheduling their PMAs every three months. Moderately susceptible individuals should schedule every three to four months to remove the plaque and calculus that has regrown, while people who are not susceptible can get by with a recall every six months.

To conclude, periodontal maintenance appointments are specifically designed to help spot and prevent the bacteria and calculus growth that facilitates periodontal disease and eventual bone loss.