Flossing daily is a gentle and effective way to protect one’s oral health, and it should not cause the gums to bleed. However, when people do not floss regularly, their gums will tend to bleed when they do floss. This bleeding often deters people from continuing to floss later on. Unfortunately, this usually leads to gingivitis and often to periodontal disease. This seemingly vicious cycle prompts a number of questions (and, fortunately, answers!): 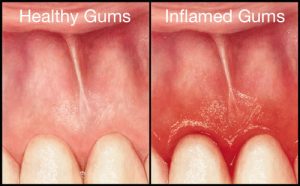 ● Why do my gums bleed after I floss? When you brush your teeth you are ridding the tooth’s surface of built-up bacteria. Similarly, when you floss, you are getting rid of the bacteria that has lodged between your teeth. However, if you do not regularly floss, plaque will build up between the teeth. The bacteria that live in this plaque irritate and inflame the gum tissue, causing the gum tissue to swell and bleed at the slightest pressure. So, individuals who don’t regularly floss experience bleeding from their gums when they do floss.

Ironically, those non-regular flossers (what heathens) tend to floss even less or not at all when they notice their gums bleeding. In reality, a more consistent oral care regimen will help lessen and eventually eradicate gum bleeding and plaque.

● How long will it take for my gums to stop bleeding when I floss? 3-10 days, flossing regularly and using proper technique. Flossing regularly means at least once a day, ideally before you brush your teeth so that your toothbrush can come into contact with the most surface area of your mouth. If your gums bleed heavily, floss after each meal as well until the bleeding ceases.

● Is it really so bad if I don’t floss regularly? Yes! According to the American Academy of Periodontology, it is a myth that flossing everyday is not necessary. Although toothbrushes are great for removing plaque from the tooth and tongue surface, floss, not toothbrushes, reach food remnants and bacteria stuck between the teeth. Without regular flossing, the bacteria between the teeth can cause the gum to pull away from the tooth, forming a pocket and allowing bacteria to build up in the pocket. Left undiagnosed, this could turn into periodontal disease, affecting both the gums and the bones supporting the tooth.

The moral of the story is … floss those teeth! Your gums may bleed the first few times if you haven’t been flossing regularly, but if you start flossing consistently, your long-term oral health will thank you for it. 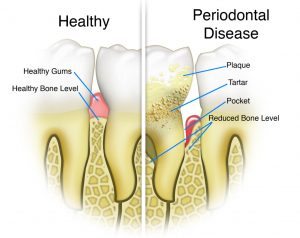