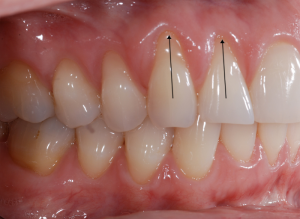 Gingival recession occurs when the gum line wears away or recedes from the teeth, leaving the tooth roots exposed. This exposure can lead to decay and tooth loss if left untreated, since bacteria can more easily accumulate in the “pockets” or increased space between the tooth and the gums. The exposed roots also make eating uncomfortable and even painful by increasing sensitivity to hot, cold, and acidic foods. But what causes recession and how can it be treated?

It may come as a surprise to learn that recession commonly occurs as a result of such trauma as aggressive tooth brushing. Gum loss occurs because individuals think they are keeping their teeth and gums squeaky clean, when in reality they are wearing down their gum tissue through aggressive and traumatic cleaning habits. Individuals can avoid this type of recession by brushing with a soft-bristle brush and avoiding forceful brushing habits.

However, it is also vital to keep one’s mouth free of bacteria to avoid inflammation caused by bacteria and resulting recession. The buildup of bacteria causes gingivitis, a disease that causes the gums to recede and the teeth to eventually fall out if the gingivitis is left untreated. A contributing cause of gingivitis is poor oral hygiene, so it is crucial to maintain good oral hygiene through a regular oral hygiene regimen at home and through consistent periodontal maintenance visits.

Also, people susceptible to recession should abstain from foods high in carbohydrates because carbs are full of sugar and bacteria loves sugar. One should also avoid foods high in artificial sugars, fructose, and corn syrup, because the bacteria is attracted to sugars and will accumulate rapidly, especially around the “sulcus” or neck of the gum where the tooth and gum line meet. The built-up bacteria may then form pockets, or spaces, between the teeth and gums, causing the gums to recede from the teeth.

Once the causal factors of recession like trauma, bacteria, and bruxism are diminished, gum tissue cells may be restored and recession reversed. However, non-causal factors such as structural defects, genetics or irreversible damage to the gum tissue generated by causal factors may heighten one’s susceptibility to recession. The good news is that periodontists can perform non-surgical scaling and root planing, visually, minimally invasive gingival therapy, or soft-tissue grafting to help ameliorate recession, no matter the recession’s origin. But by avoiding both overly-aggressive and negligent oral hygiene, abstaining from a plethora of bacteria-attracting foods, and alleviating symptoms of bruxism, individuals may reduce their susceptibility to gingival recession in the first place.