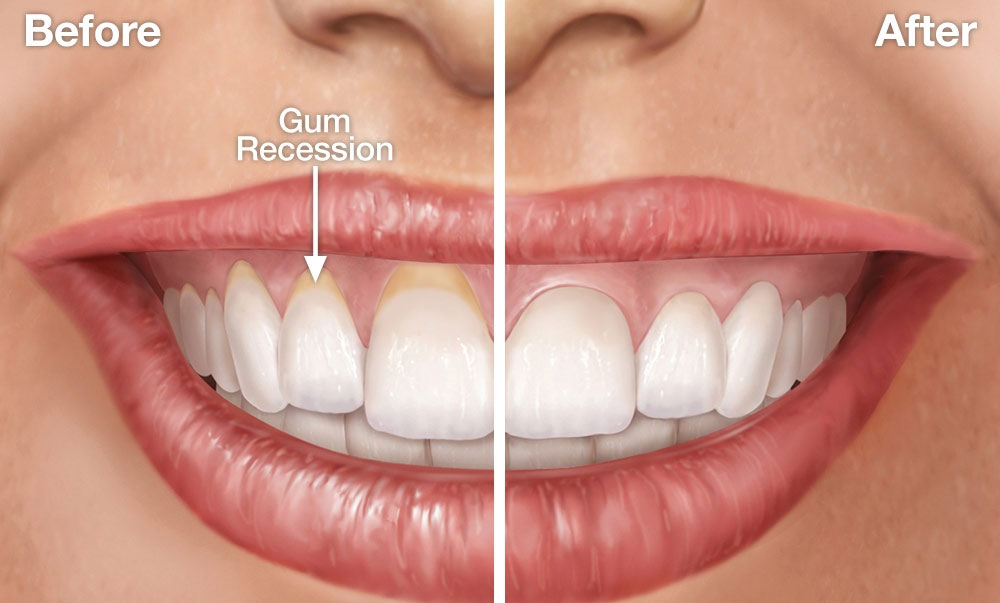 Gingival recession is a common result of periodontal disease. It occurs when the gums pull away from the tooth because of bacteria or occlusal trauma, increasingly exposing the tooth surface and often giving the tooth a longer appearance. Because the onset of gum disease is initially painless, one of the best ways to determine whether your gums are at risk is to check for gingival recession. But sometimes it can be hard to tell. How do you know if your gums are receding?

First, simply look in the mirror at your teeth. Do they appear longer than usual? If so, that does not mean your teeth have miraculously grown; instead, it means that the gums have shrunk away from the tooth. This recession is sometimes caused by the bacteria that has accumulated underneath the gum line in an area not visible to the naked eye. That bacteria is eating away at the gum tissue, causing the gums recede from the tooth and giving the tooth the deceiving appearance of greater length. Recession can occur in a non-inflammatory situation when there is no keratinized gum, prominent root, and no bone on the cheek side of the root. If this situation describes you, you should seek the advice of a periodontist.

Second, check to see if your gums are red, inflamed, puffy, and/or tender. These are symptoms of irritated gums caused by bacteria busily at work damaging the gum tissue. Healthy gums are firm, light pink, and elastic. Gums near the beginning of periodontal disease appear darker and inflamed in the “C” shape surrounding the tooth, while gums in the more advanced stages of periodontal disease have a greater overall appearance of inflammation and redness.

Third, notice whether your gums bleed and feel tender when you floss and brush. If flossing causes blood to flow from the area where the floss has cleaned between each tooth, this could indicate gum inflammation, which eventually leads to gum recession. Gum recession is especially likely to be present if the gums bleed when brushing and flossing even despite attentive care, gentleness, and regularity.

Fourth, assess your teeth’s sensitivity to hot and cold food and drink. When the gums recede, the tooth roots become increasingly exposed. The tooth root, unlike the top portion of the tooth, is not covered in protective enamel. Instead, its only covering is a thin layer called cementum which does not as effectively protect the nerves in the tooth root from painful exposure. Therefore, heightened oral sensitivity to hot and cold likely means that the gums, which were formerly protecting the tooth roots from exposure, have pulled away, leaving the roots exposed.

Lastly, assess if your teeth feel loose or mobile. When the gums recede, the teeth lose the surrounding support that formerly kept them secure and immobile. Mobile teeth are a sure sign that gum recession is occurring.

Upon noticing any of these symptoms, seek the advice of a periodontist. If you have periodontal disease, we will be able to create a personally tailored, effective treatment plan just for you to fight gum recession and periodontal disease.